More than a month. Yes, more than a months has gone since #VandFTietheKnot. And many of you were surprised because knowing me, I never keep secrets for long – at least, not of this magnitude. True. You win! And to that question, I’ve been replying that I didn’t’ know either, hence keeping this secret was not big a deal at all! 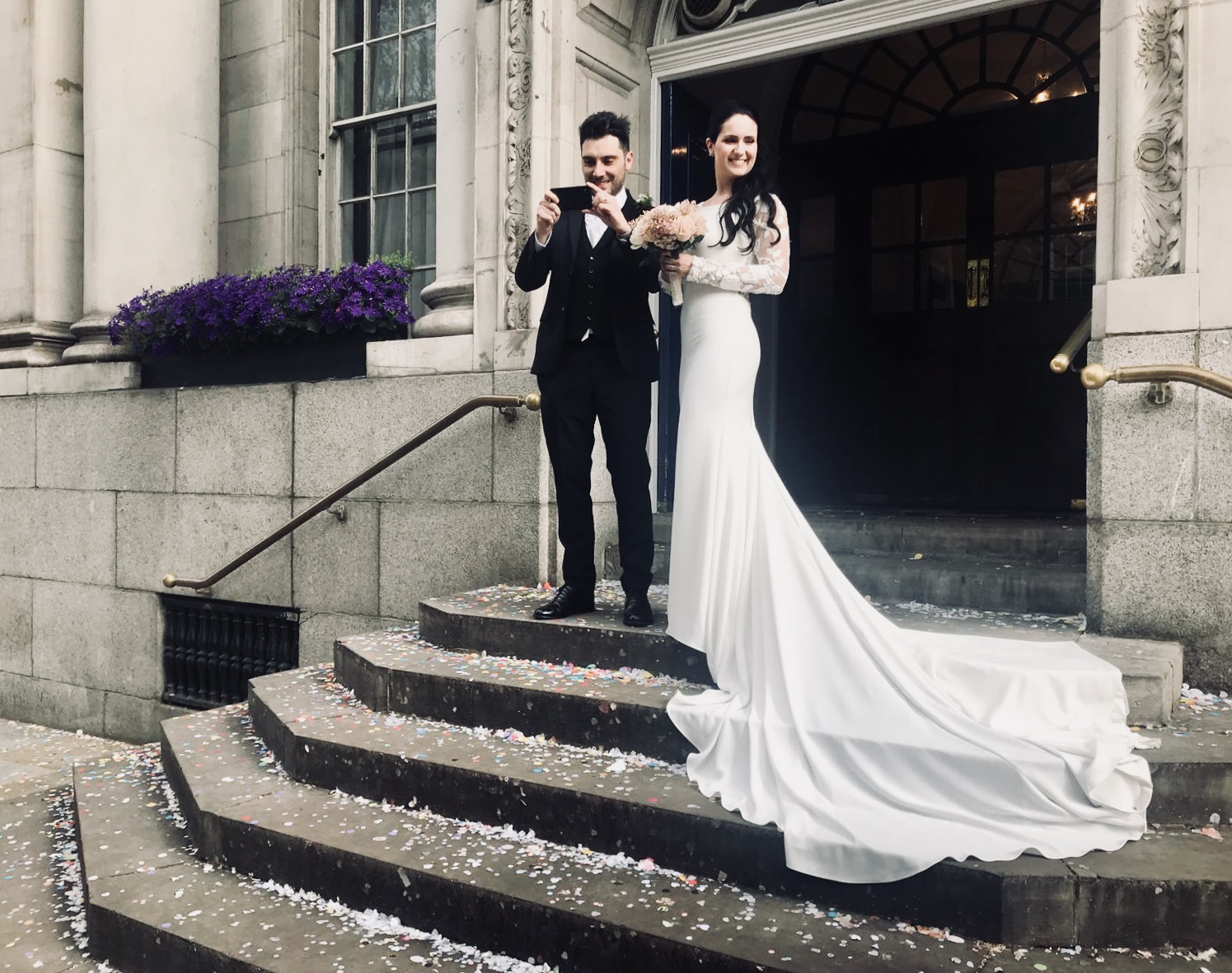 Let’s rewind for a sec.

In February, I had no idea this would happen – then well, life happens and Fabio decided to move to California for work. It all rapidly unfolded and I found myself organising a civil wedding in my adopted country, with less than 2 months to go.

Here is what I did.

Giving notice of intention of marriage – this is a formal notice to the world saying you intend to marry – this is done so anyone who is against it (for non trivial reasons you’re already married or something…). Giving notice for a civil wedding is easy – the thing is you need to respect several time-bound rules and instructions. As a non-British citizen (yet) I could only give notice in the council where we live, Westminster. This was done by phoning and getting an appointment to go do it. I rang on the 6rd March, thinking I’d get it very easily in the next few days. Wrong: first available appointment was 3 April… Thing is notice needs to be affixed publicly for 29 days before you can actually marry. And Fabio was leaving in May for the States…

Choosing a venue for the ceremony – we have been based in SW1 for years now and it was only a natural choice to go for the Old Chelsea Town Hall on the Kings Road, in Chelsea. Stunning staircase, cute antique rooms and a mere 10-minute drive from home. I booked the 4th reluctantly because it was a Friday and it was complicated for people to get time off work but any other date was taken… and that was the first useful day after the notice. We chose the Rossetti room – up to 14 people, a private, little room where we exchanged vows and had some of our favourite classical music played – Amore and Happy birthday Mr Lawrence by Ryuichi Sakamoto. 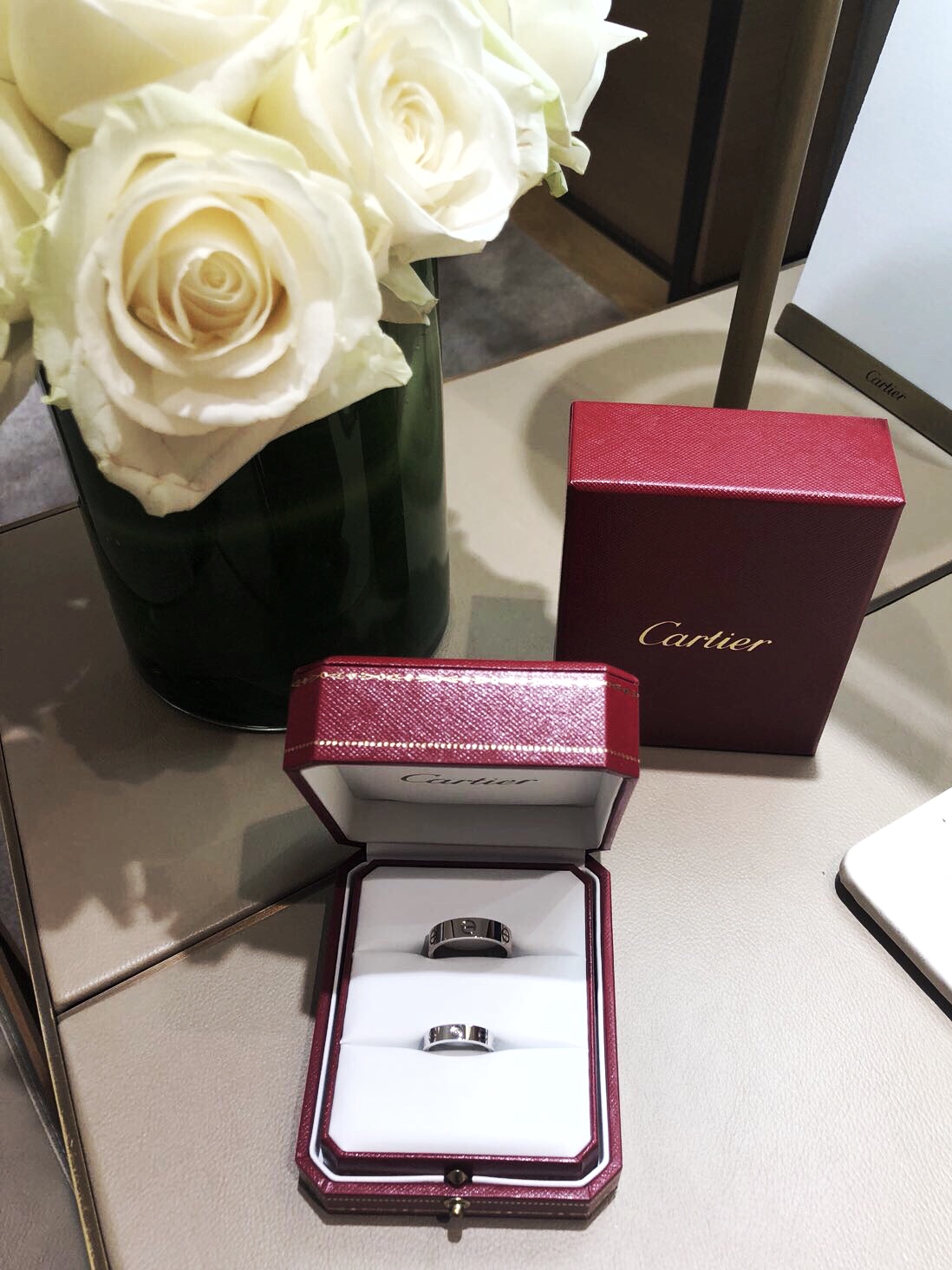 Dress hunting – you know I have very crystal-clear ideas on fashion and what works for me. Initially I thought I would go for a white gown that not necessarily was a bridal dress. Great idea in theory, hard to put into practice. Too short, too revealing, too frilly, too expensive… in short, a nightmare decision. After pondering for a week on a stunning Tom Ford number that regrettably was a size too small, I leaped and booked an appointment at Pronovias. This was the 20 March. Just a quick flick through their website and I found 3-4 options that suited my body type and my style.

The store, frolicking with brides to be and their entourage, is in Bond Street and has stunning spaces to do fittings and drink champagne. Of course they were startled when I said I meant May in 2018…. so the search started. As normally brides start looking for a dress 6 months to a year in advance… and Pronovias is based in Barcelona – so I was just extremely lucky they had the style I wanted to try in stock. …Daphne it was. I just had to wait for a few weeks for the dress to be dispatched and then fittings would begin – I had 2: one on 14 April to alter the most of it (I needed a sewn-in bra, some reductions on the hips and some shortening of the train) and one on 25 April, just a week before the big day.

The groom’s suit: it’s Donna Karan black evening suit, with a grey-toned waistcoat. The tie was light grey to match with the beading of my dress and the flower for the jacket were chosen from the bridal bouquet (my dad and the batsman also wore one).

Shoes: believe it or not, this is the only thing I have not bought. I had a fabulous pair of Louboutin stilettos sandals from last year and they were the perfect nude so… 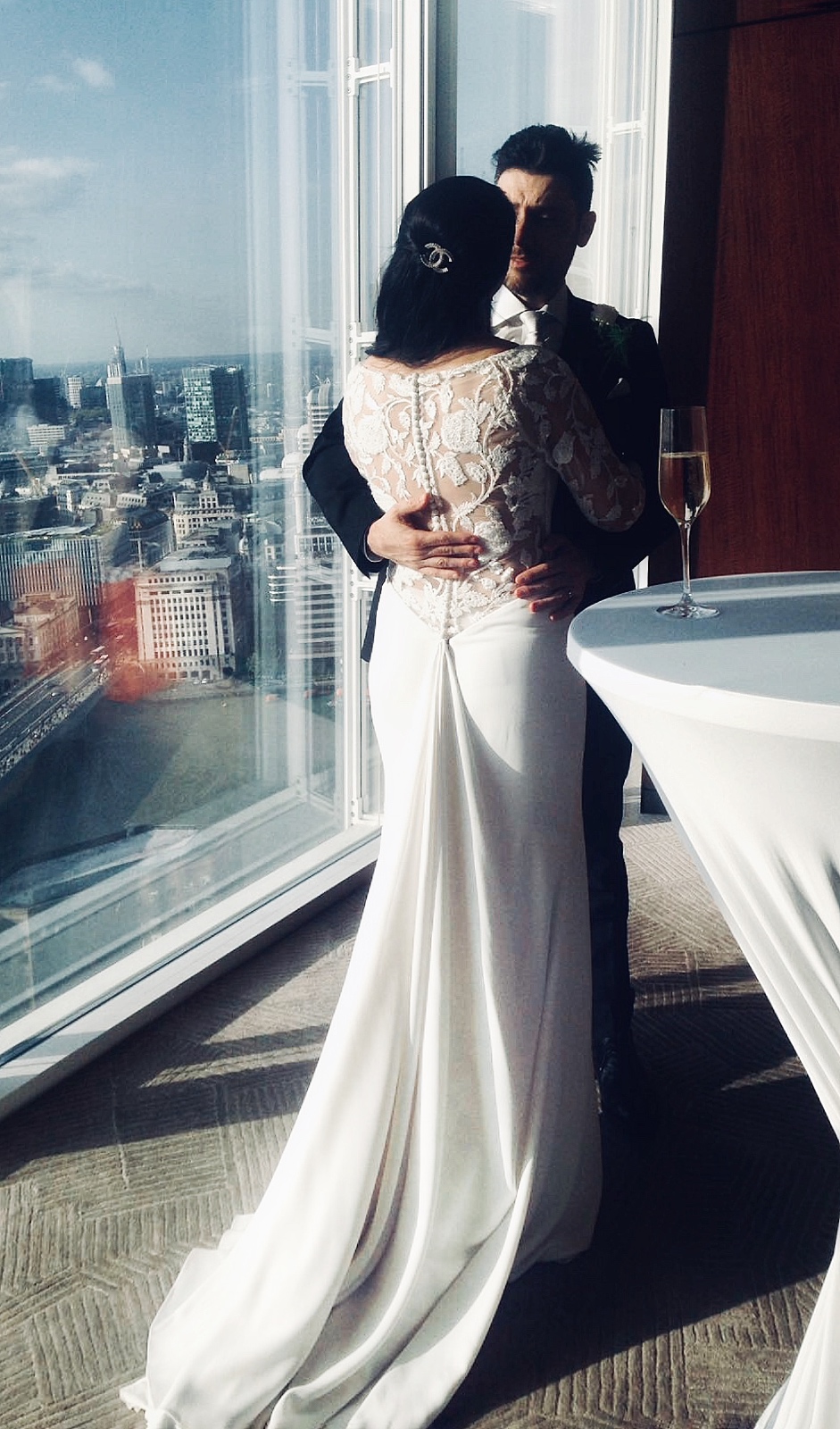 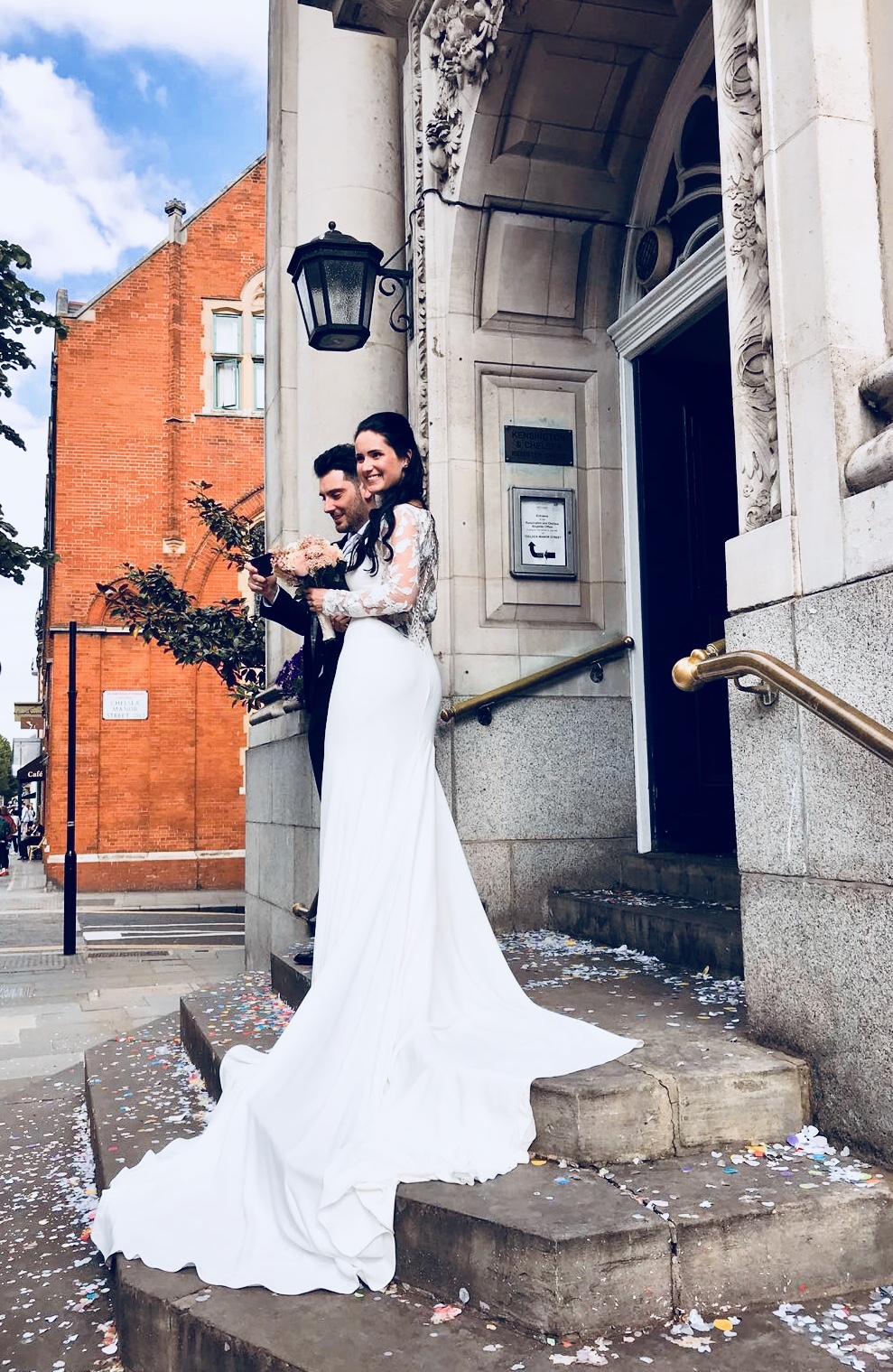 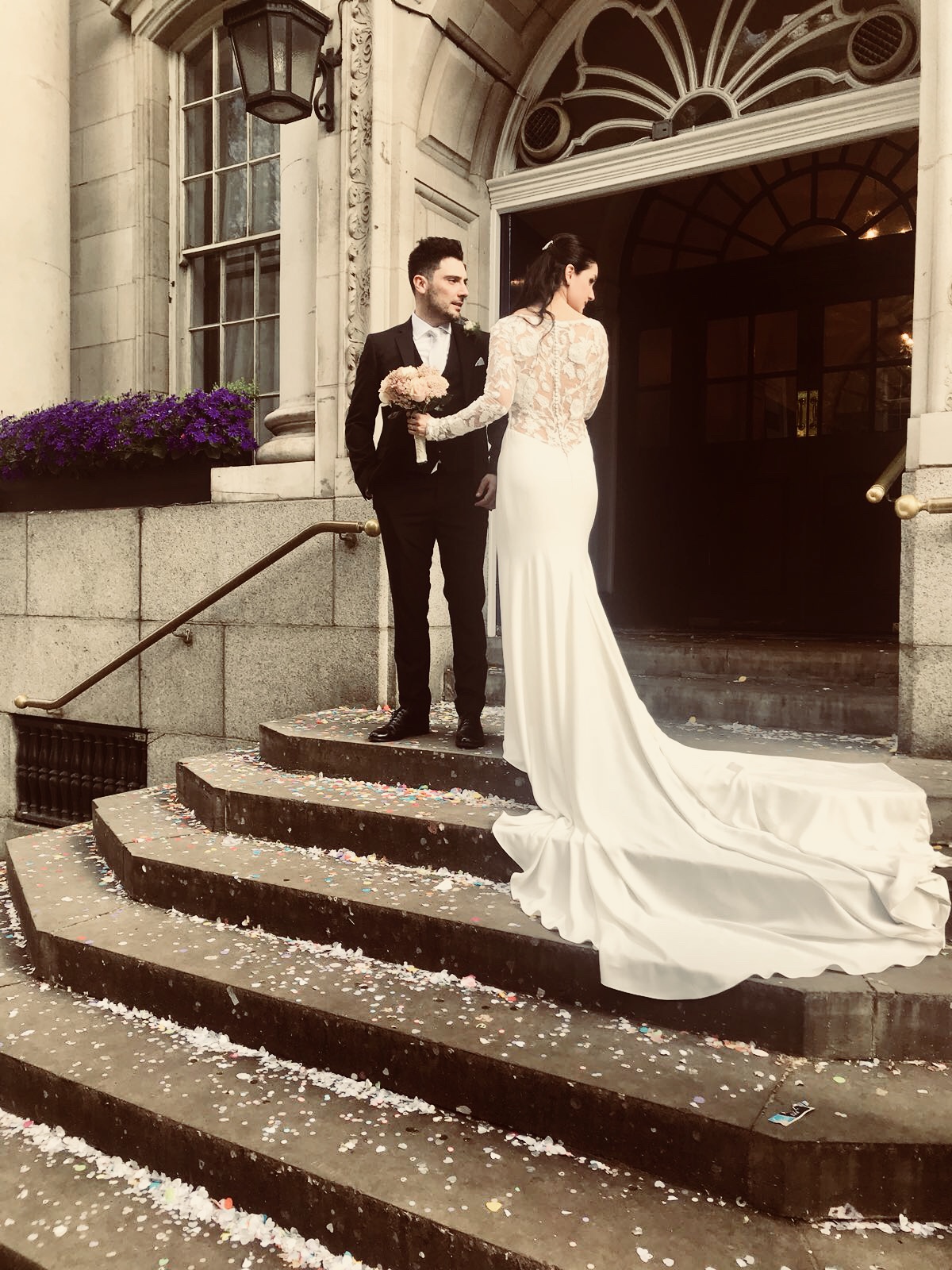 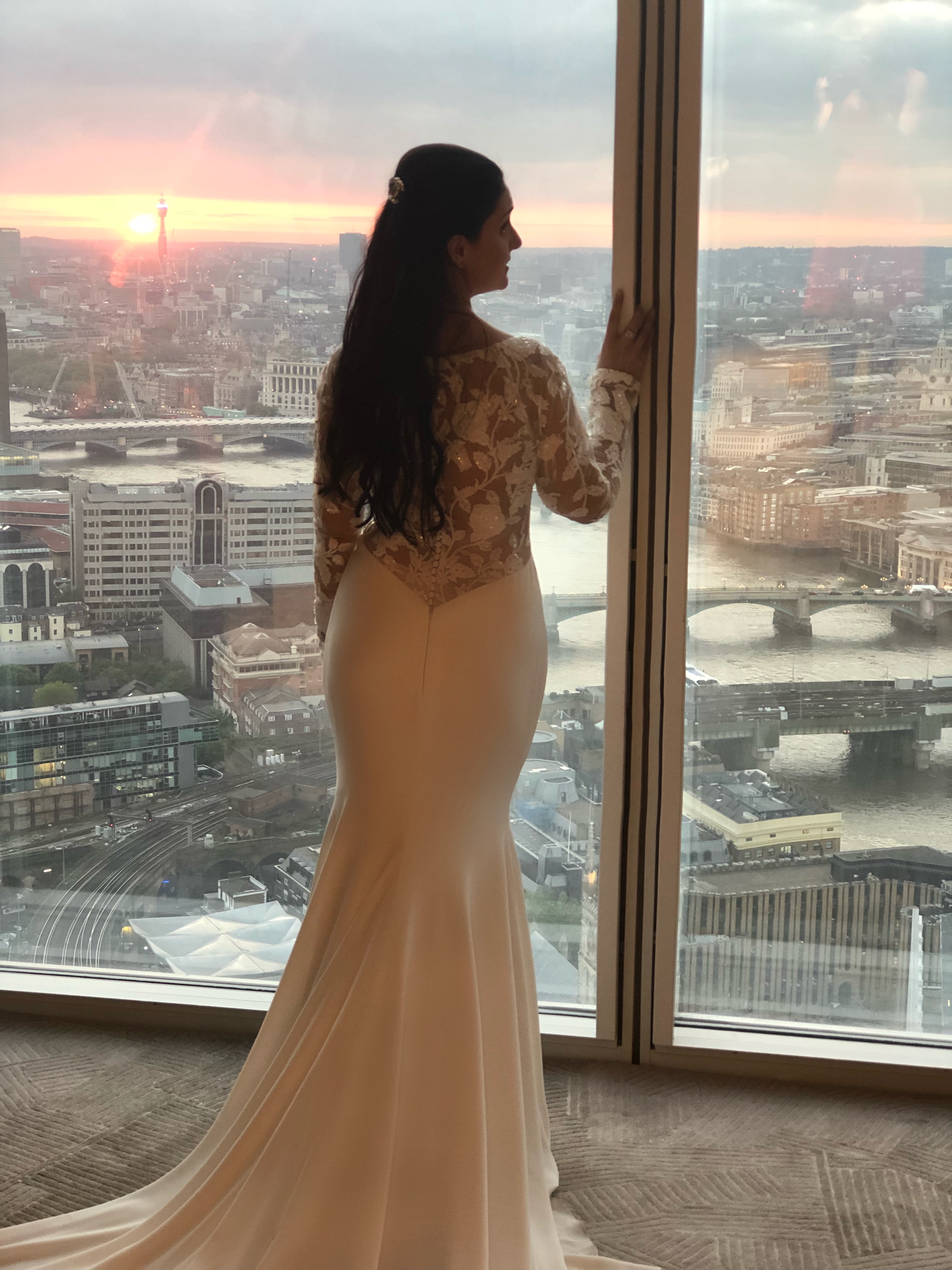 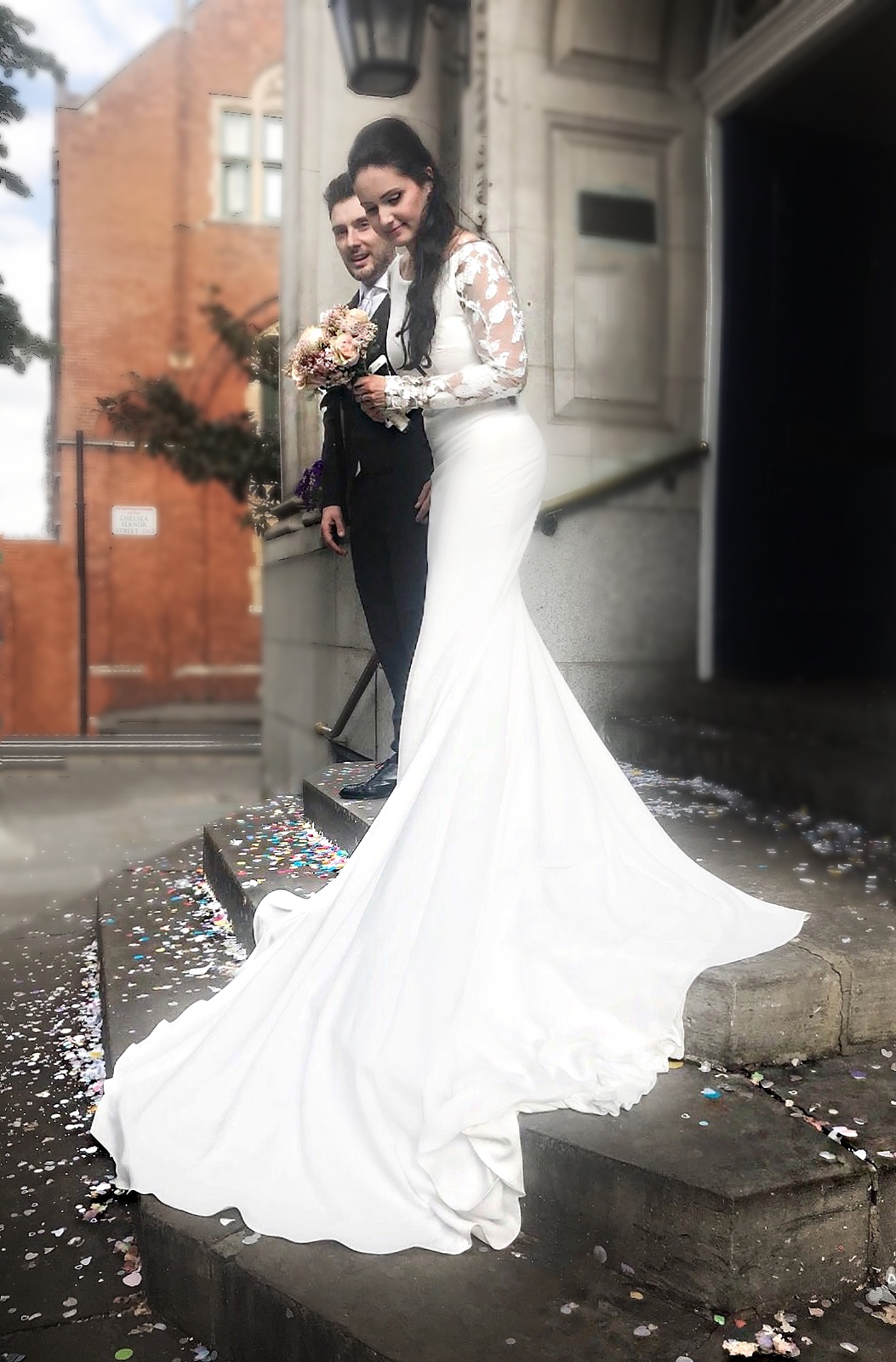 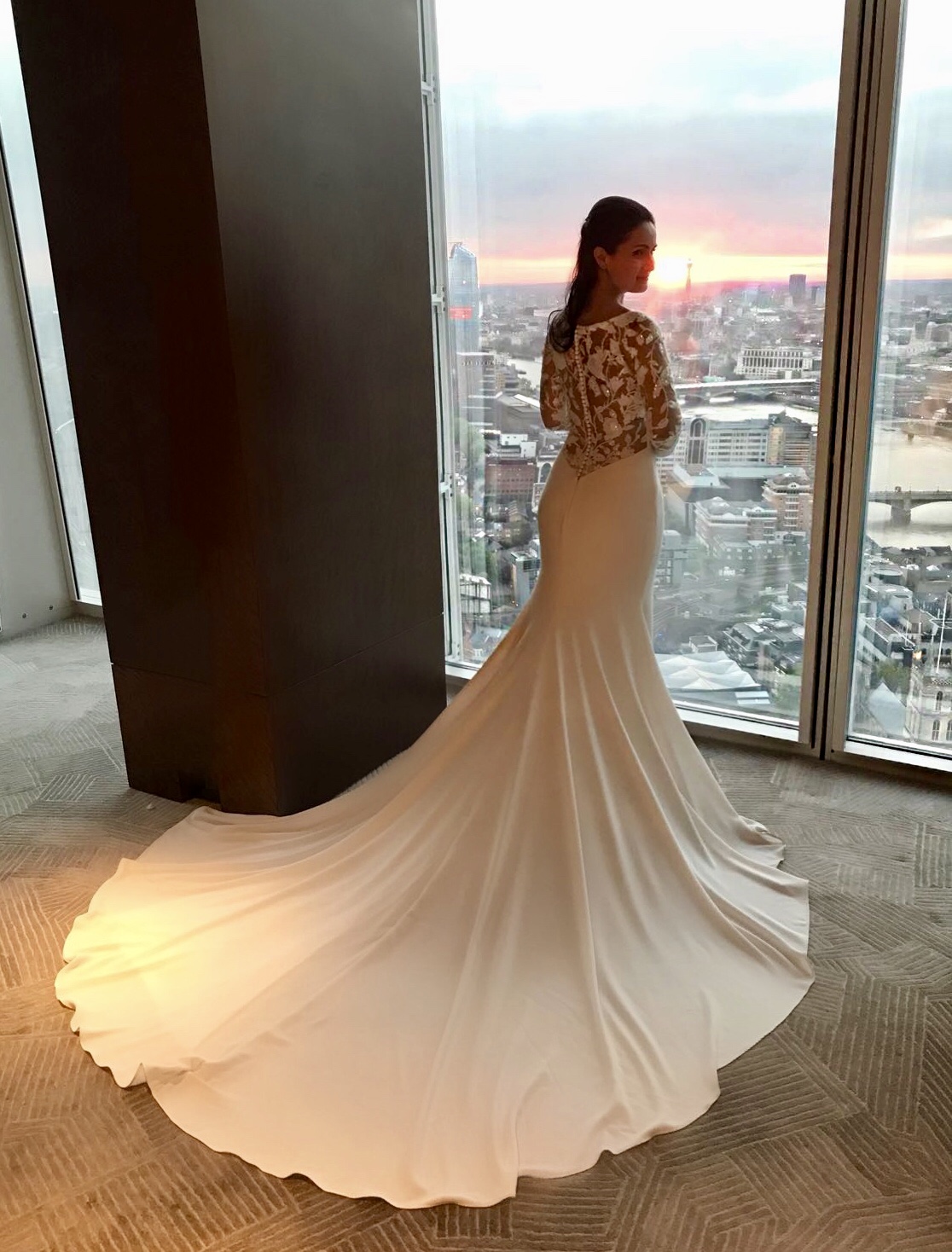 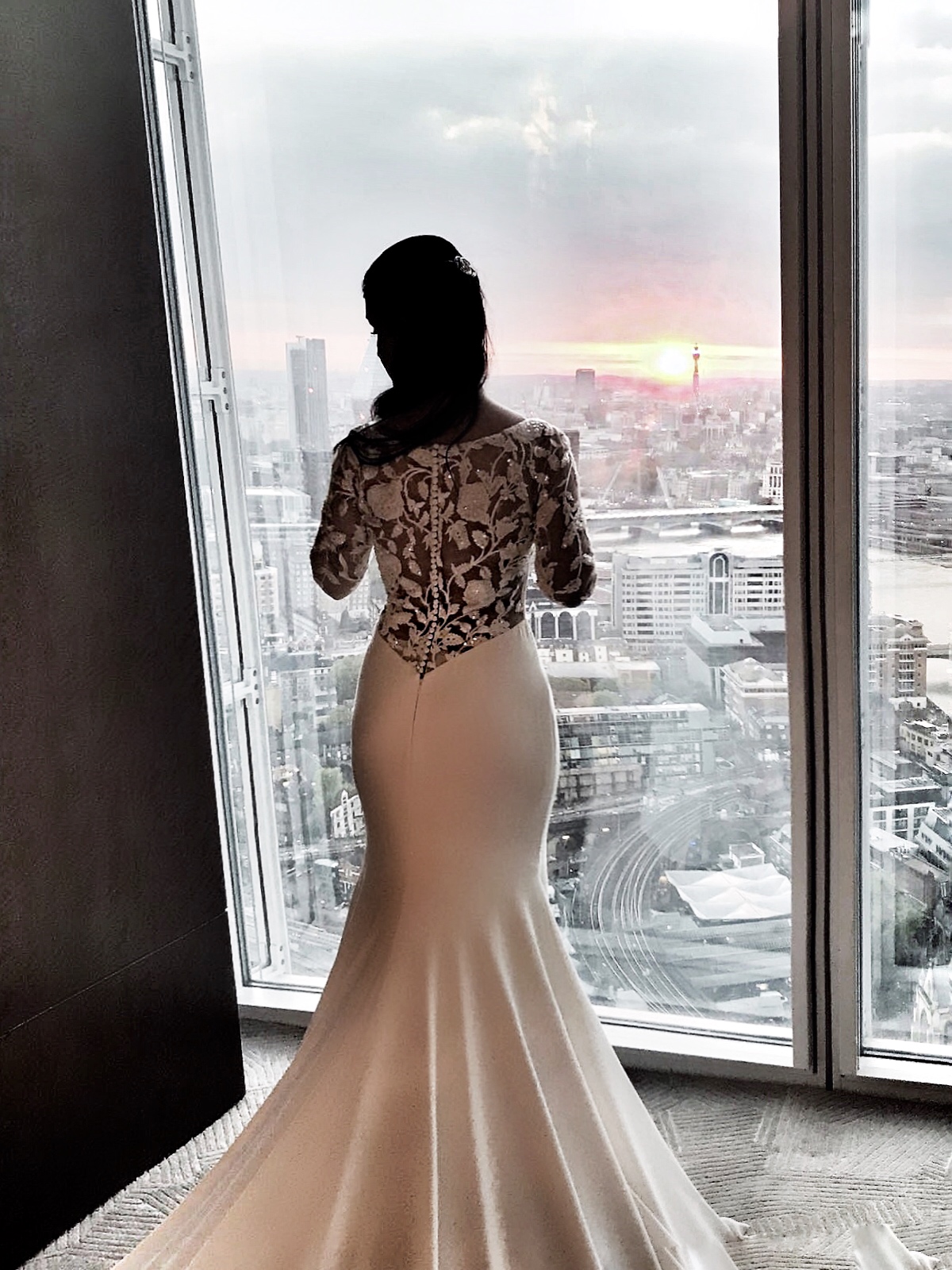 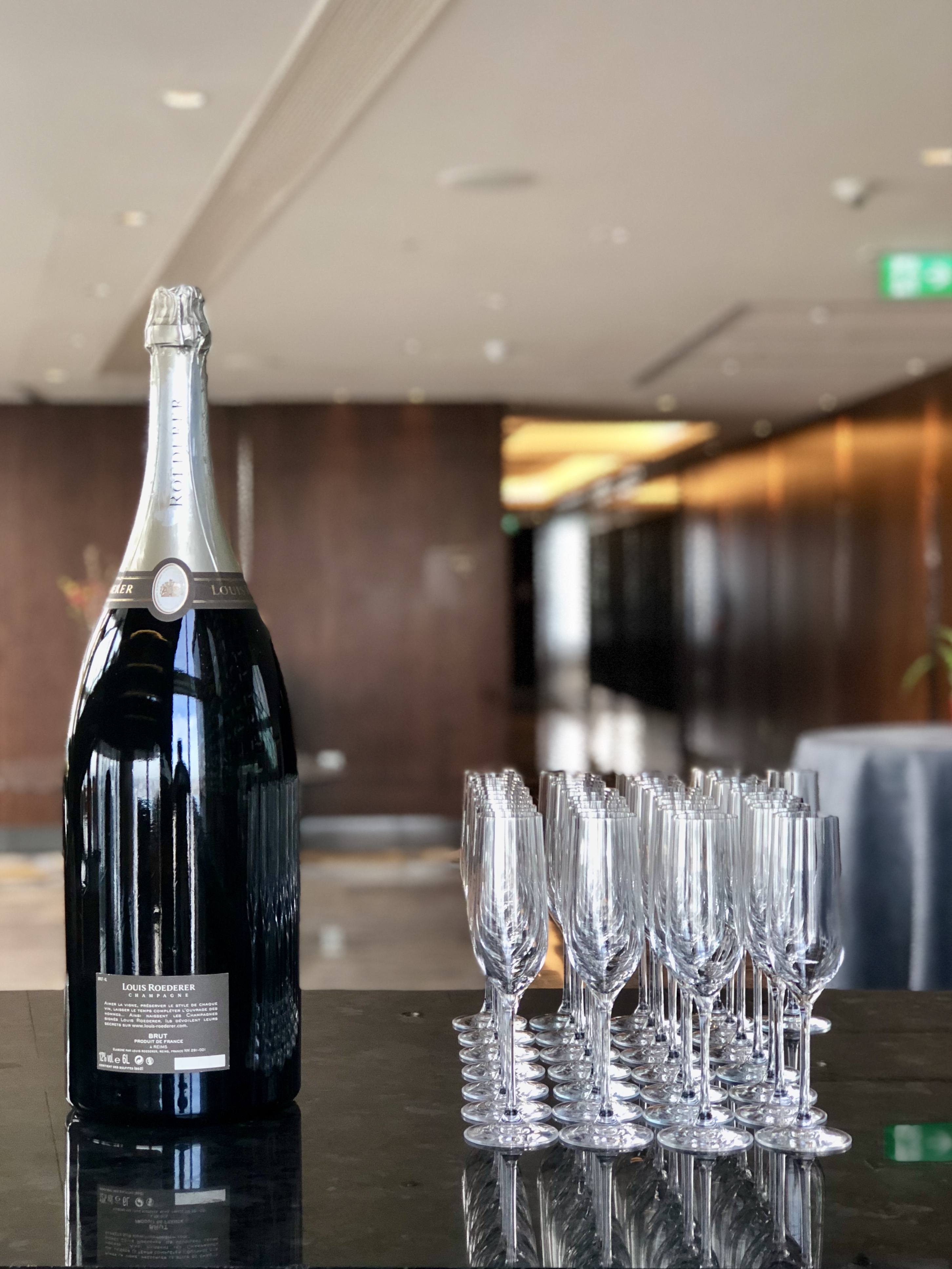 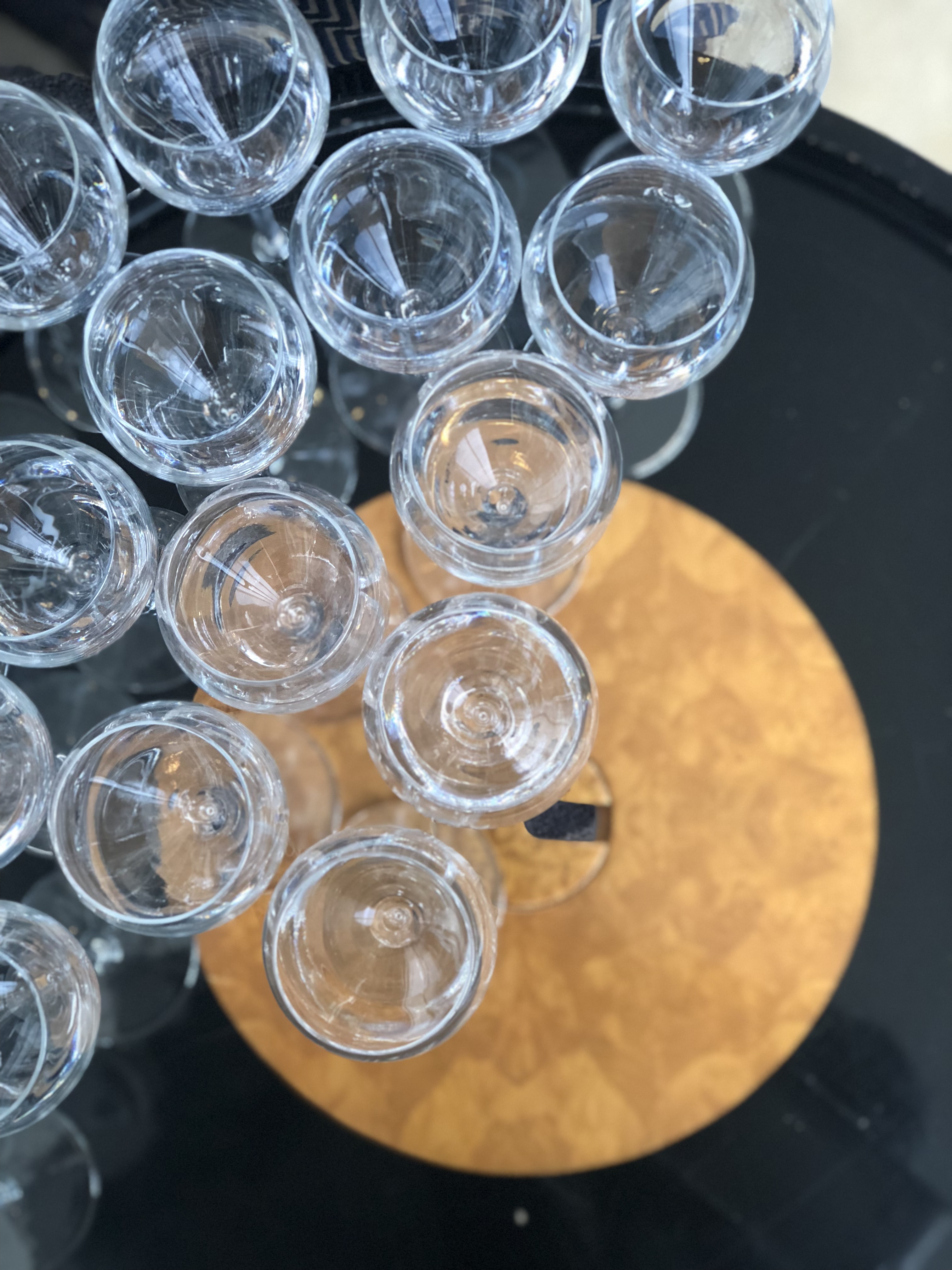 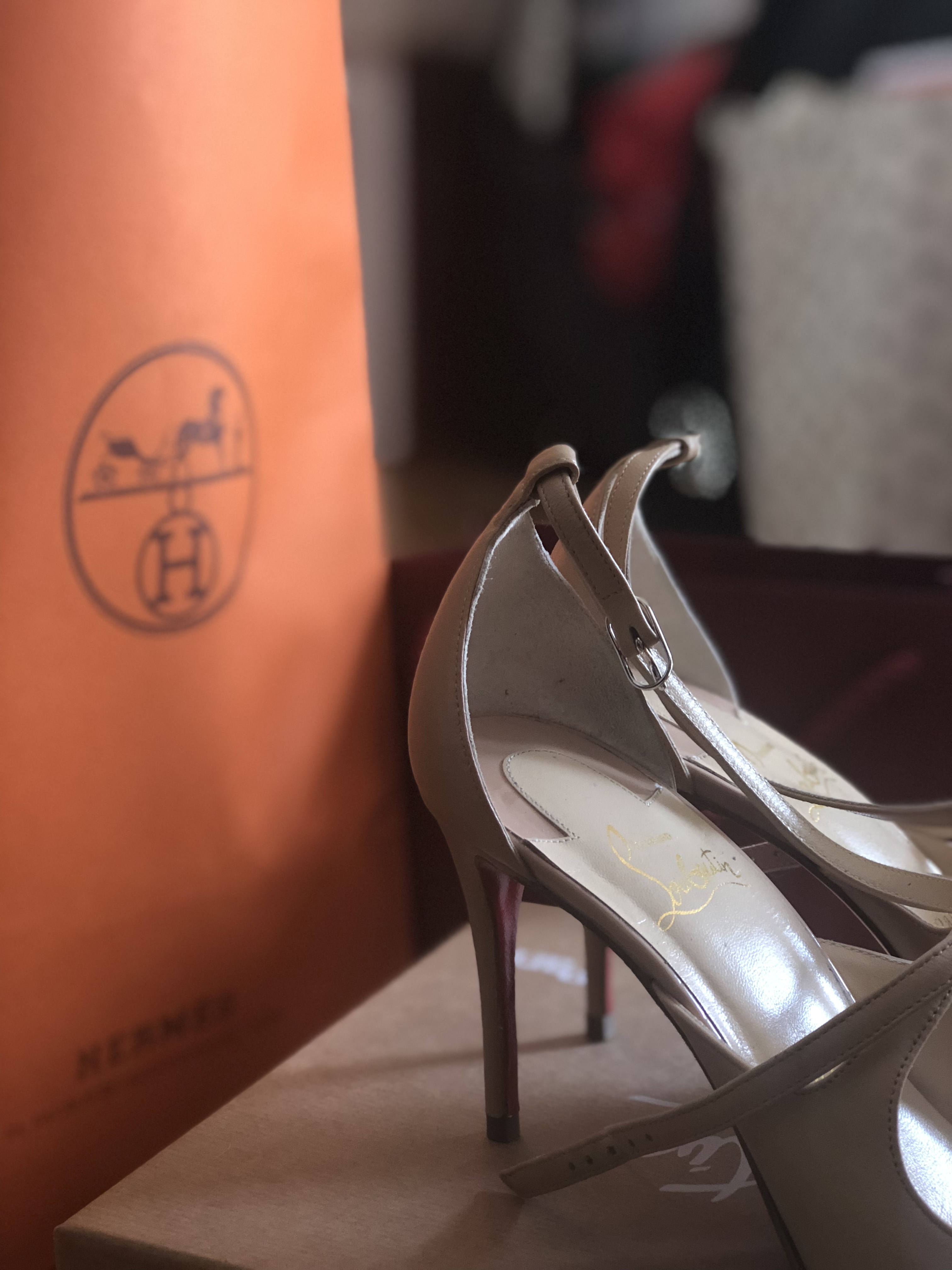 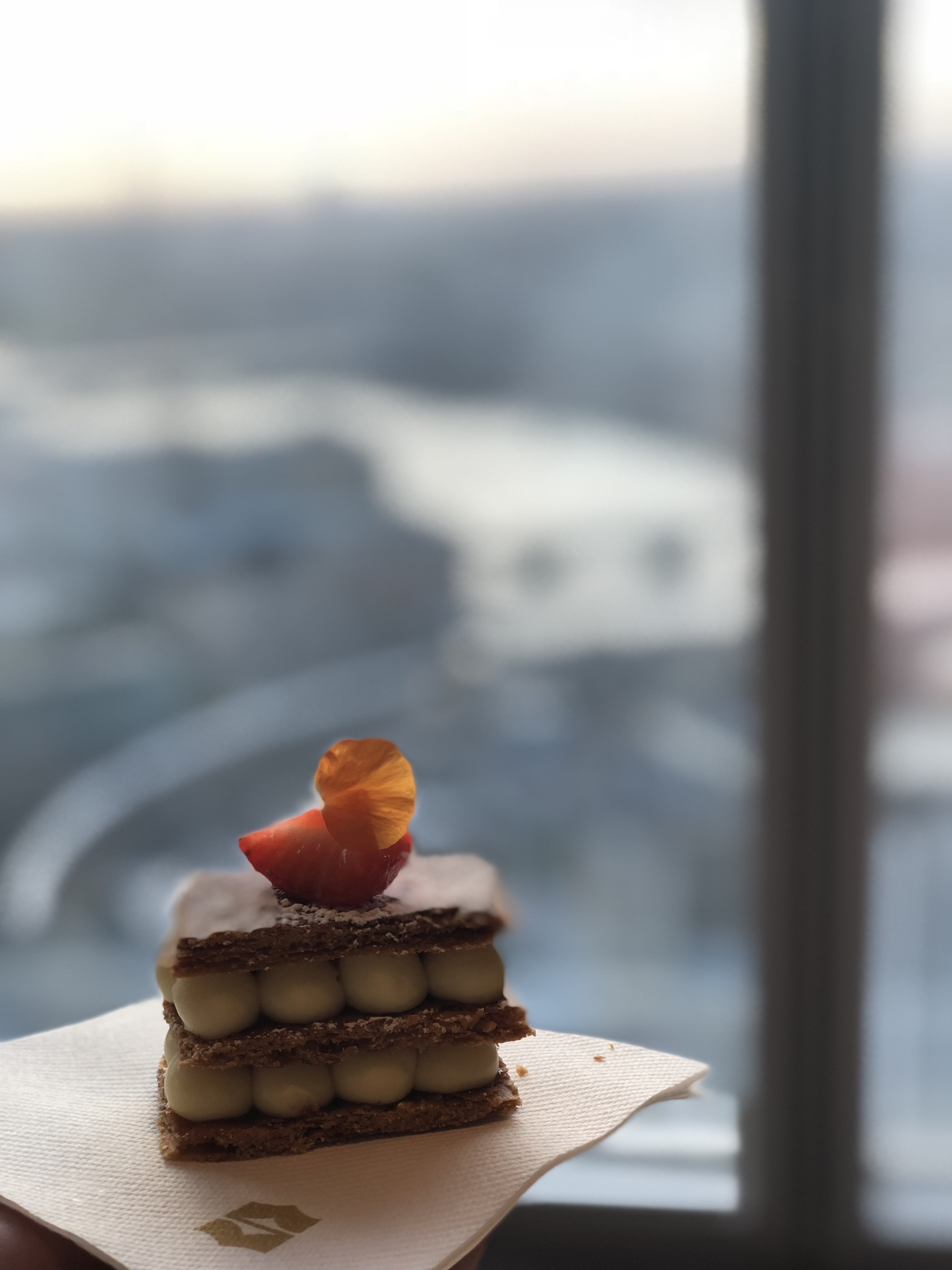 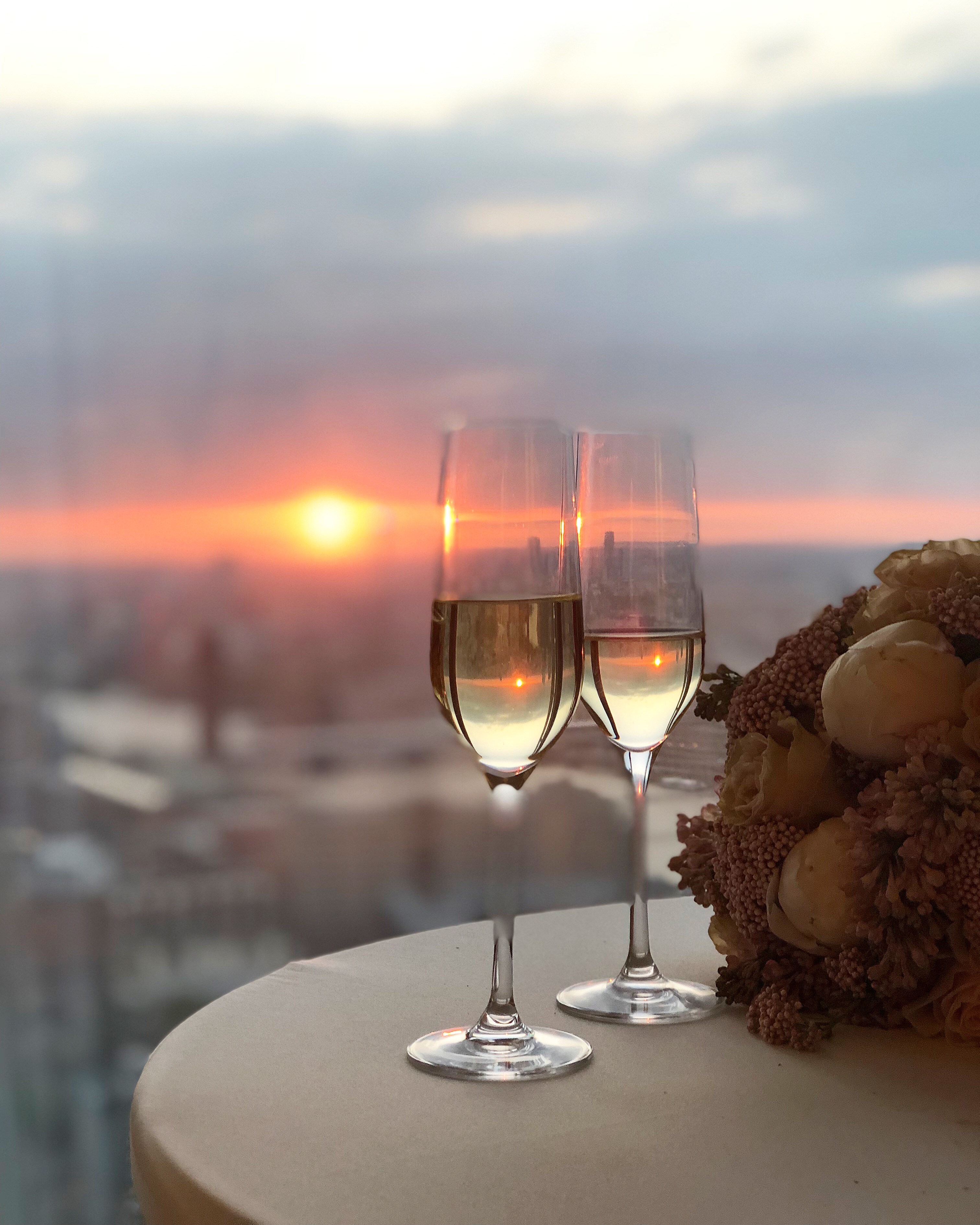 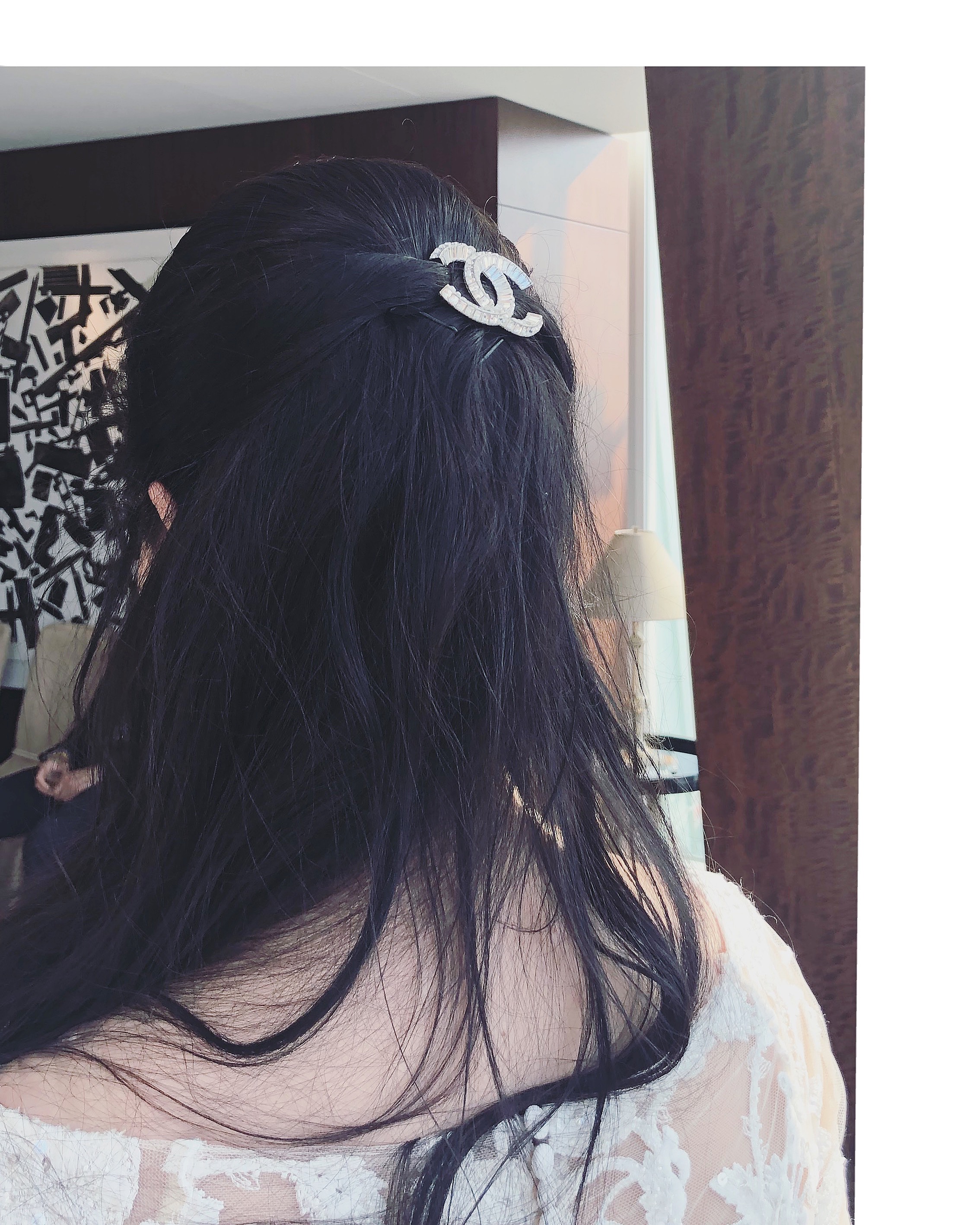 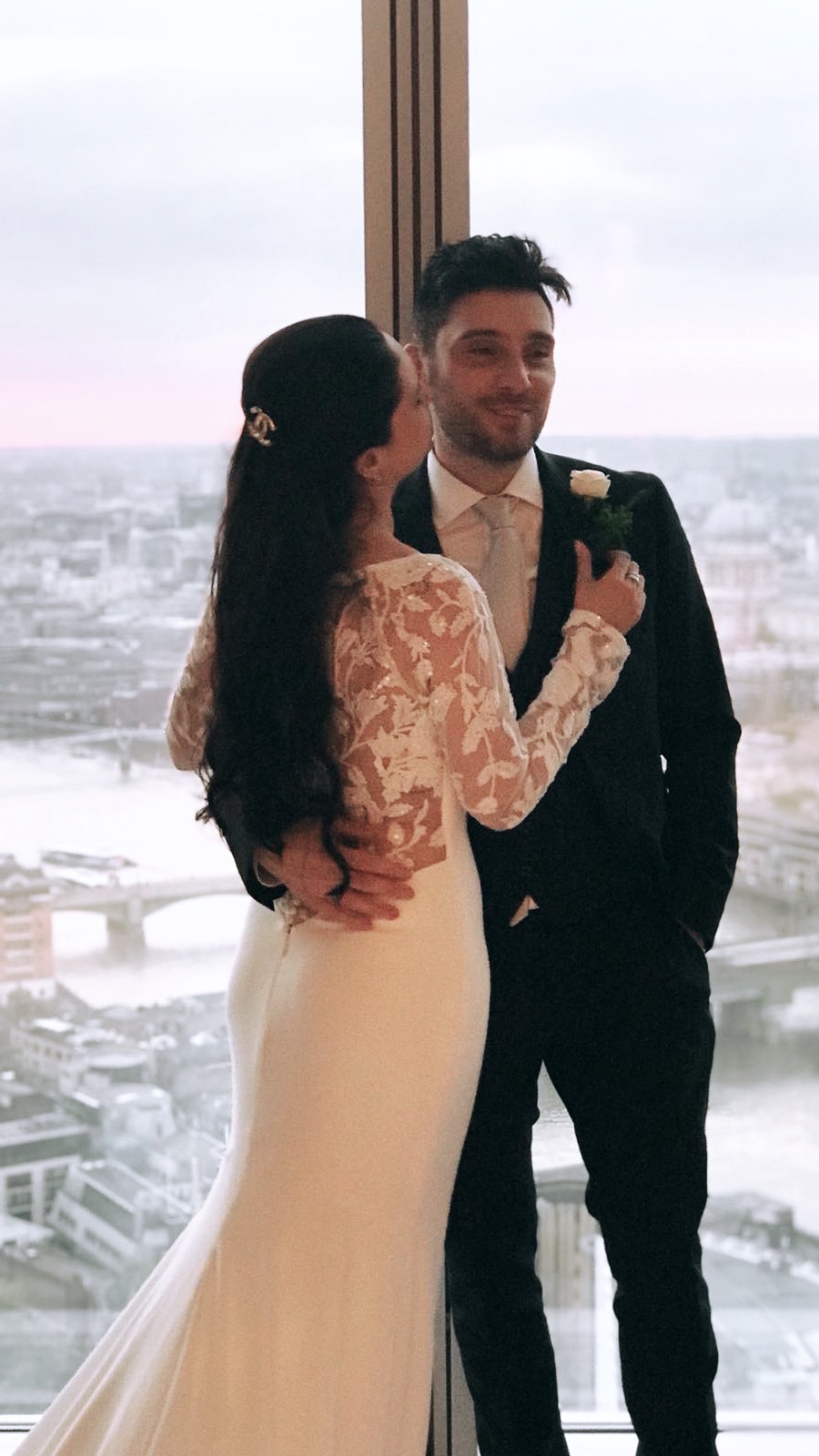 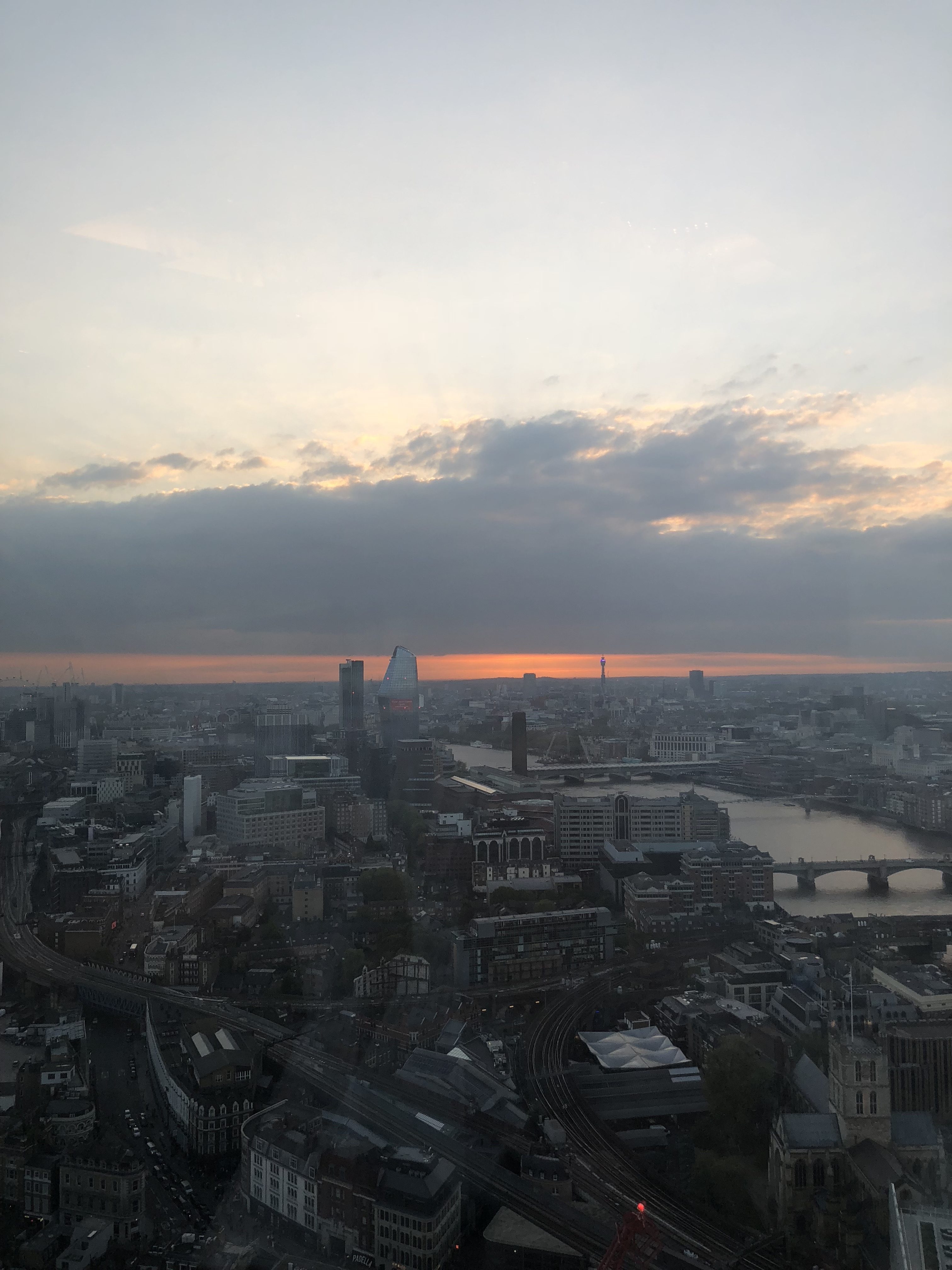 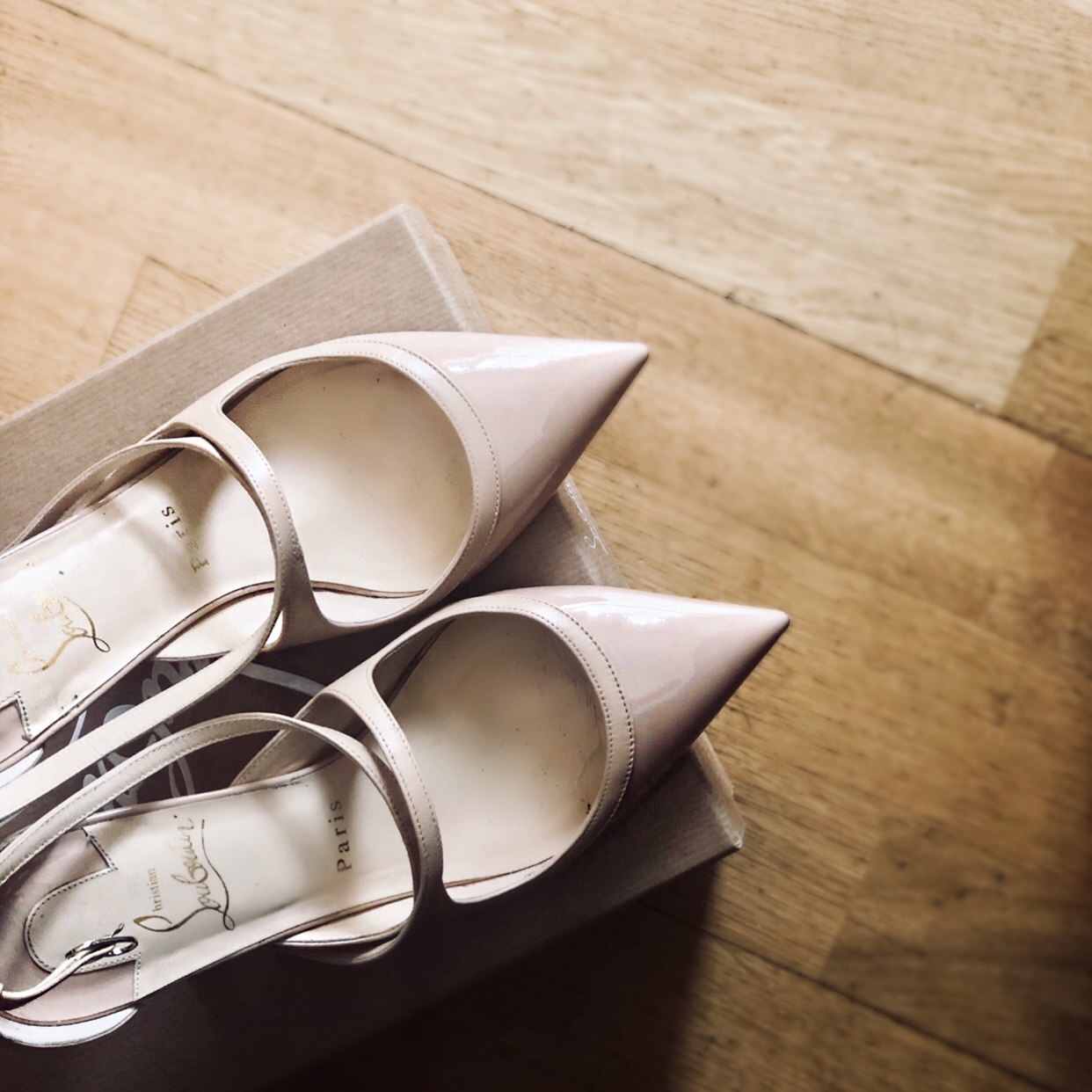 Makeup: I always am unhappy about make up by others. So, you know me: I did my own! And it was a winning choice 🙂

Nails: I’ve been trialling nudes for the first 3 months of the year – and then settled for Madame est nue by Louboutin Beauté. Perfect shade painted by my Cowshed crew at Carnaby.

Hair: I wore a simple half-up, half-down hairdo with soft curls and a bit of a backcombing, done by marvellous Ryan at Trevor Sorbie and fix it all up with a Chanel hair piece. It had to be that 🙂 I also wore a pair of simple Chanel costume jewellery earrings, sporting the classic CC in ivory Swarowski.

Venue: this was done by exclusion. I’m very keen on bright, natural light-filled areas. And going for a private 10-guest-only do I needed something beautiful that wouldn’t be wasted for being too big.

and finally went for the Shangri-La at the Shard. 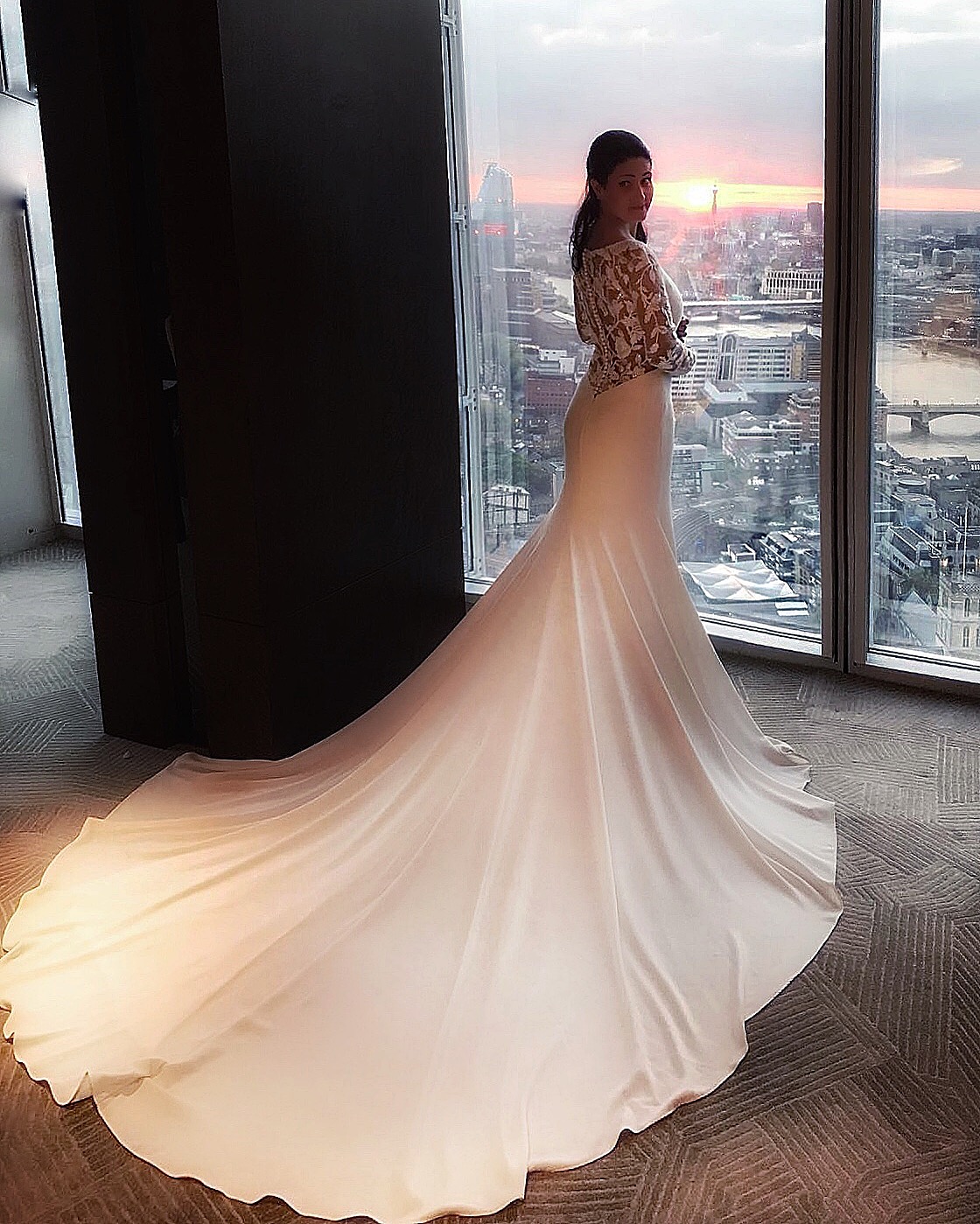 Always a big fan of skyscrapers and 360° views, I found the Li Room on the 32 floor perfect for our small party. They had catering and canapé with champagne to be added to the hire and sunset was perfect through the floor-to-ceiling windows over St Paul’s and the Tower of London. The room was private, filled with light and perfect for standing, chatting and having nice photos taken. No cake! I’m more of a savoury kinda girl, you know. We had sweet canapés and macarons instead. And champagne. Lots of it.

Rings: I was very adamant that I needed rings to be very me – something so important that is worn at all times, I wanted to be sure I loved it. It was and wasn’t easy at the same time: I hate the classic bands in gold so that made it easy to choose; it was hard because I only liked one or two options… We finally went for the Love band from Cartier – a long-time dream of mine that was possible thanks to an amazing staff at the store in Bond Street who engraved them in no time and helped me have the time of our lives.

And yes, I had a Hen Do: it was not the usual let’s-get-smashed-and-crazy kinda do but you know me, I’m not a party animal these days. Because the wedding was going to be only family and I always wanted to have lots of guests, I found a compromise with the hen do. I invited most of the friends in London who could make it and my friends Vasiliki and Bea hosted it at the Soho Hotel. Needless to say it was a long afternoon of champagne and afternoon tea, with laughter and love all around. Thank you! (I did get to wear a sash and a veil, if you ask…)

and ask away if you have any doubts!